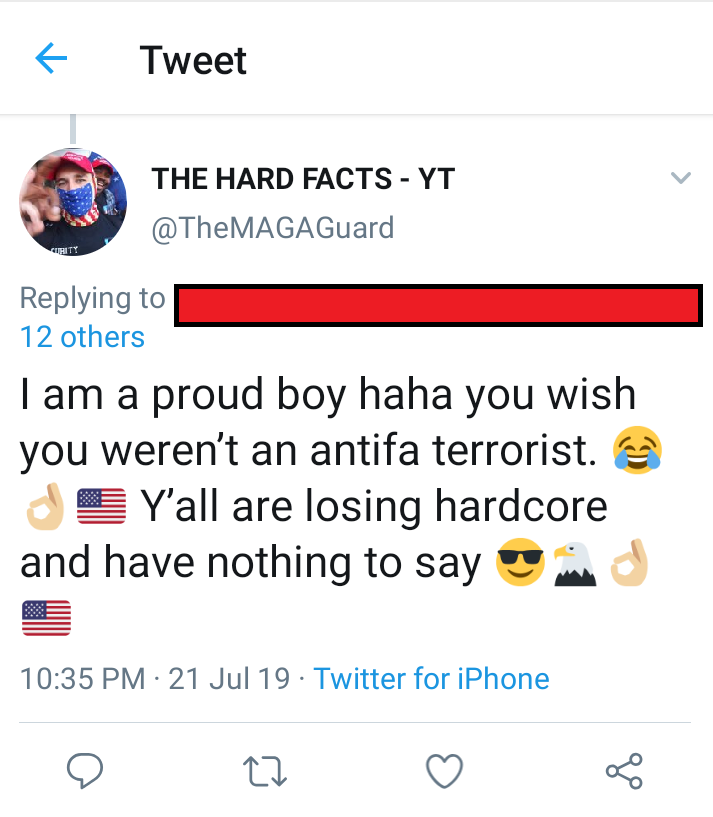 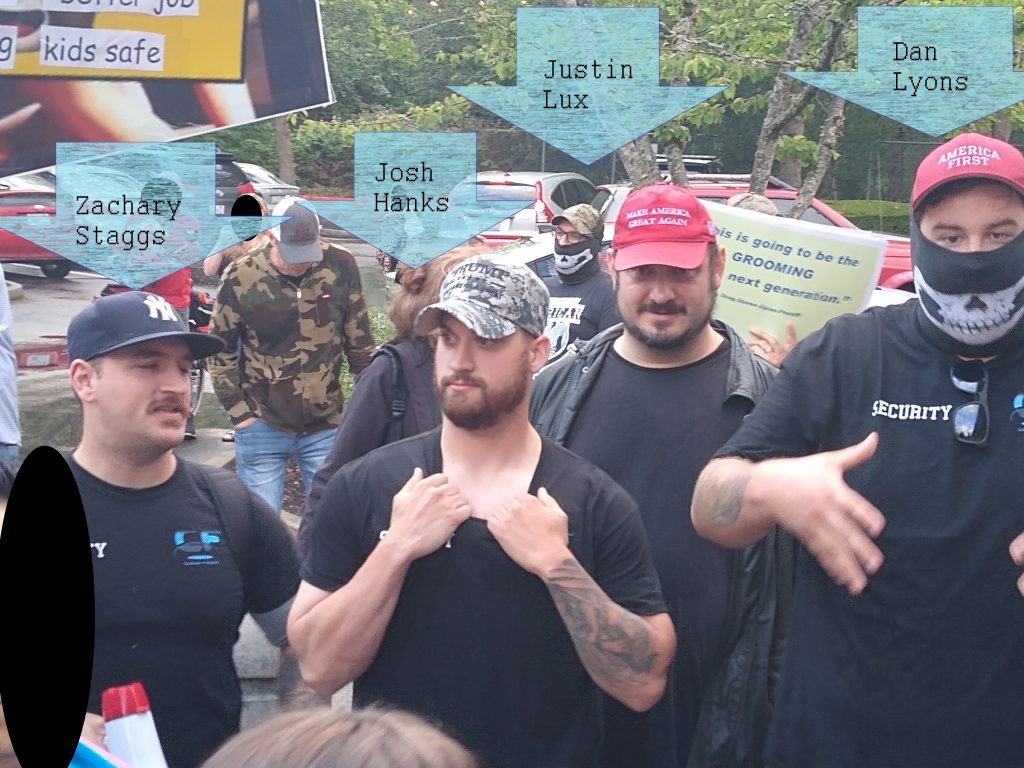 On August 4th Staggs, Josh Hanks and other Proud Boys spent hours harassing a “Border convergence event” with traveling speakers about the situation on the southern border. Afterwards they traveled to Occidental park where they attempted to enter Fuel bar frequented by the Emerald City Supporters. The soccer club had been vocally supportive of antifascism. After being denied entry they attacked Sounders fans leaving the game for wearing the Iron Front symbol used by antifascist groups.  That incident was covered by Sounder at Heart and the Seattle Times. 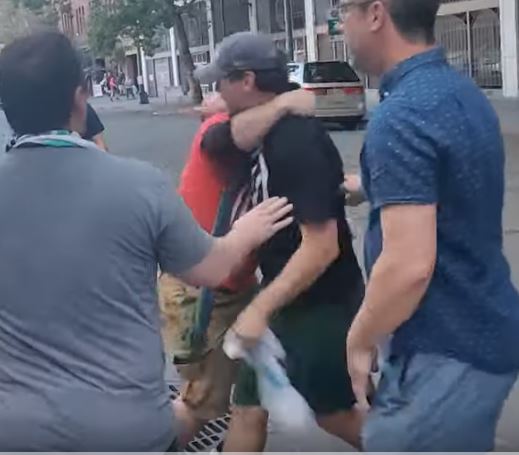 Not content with political violence and marches alone Staggs and the Seattle Proud Boys lent muscle to “Referendum 88” the campaign to deny minorities legal protection against discrimination in Washington state. Assisting Staggs was outed Ballard neo-Nazi and distributor of Atomwaffen propaganda Sean Scott shown here to the right of Staggs. 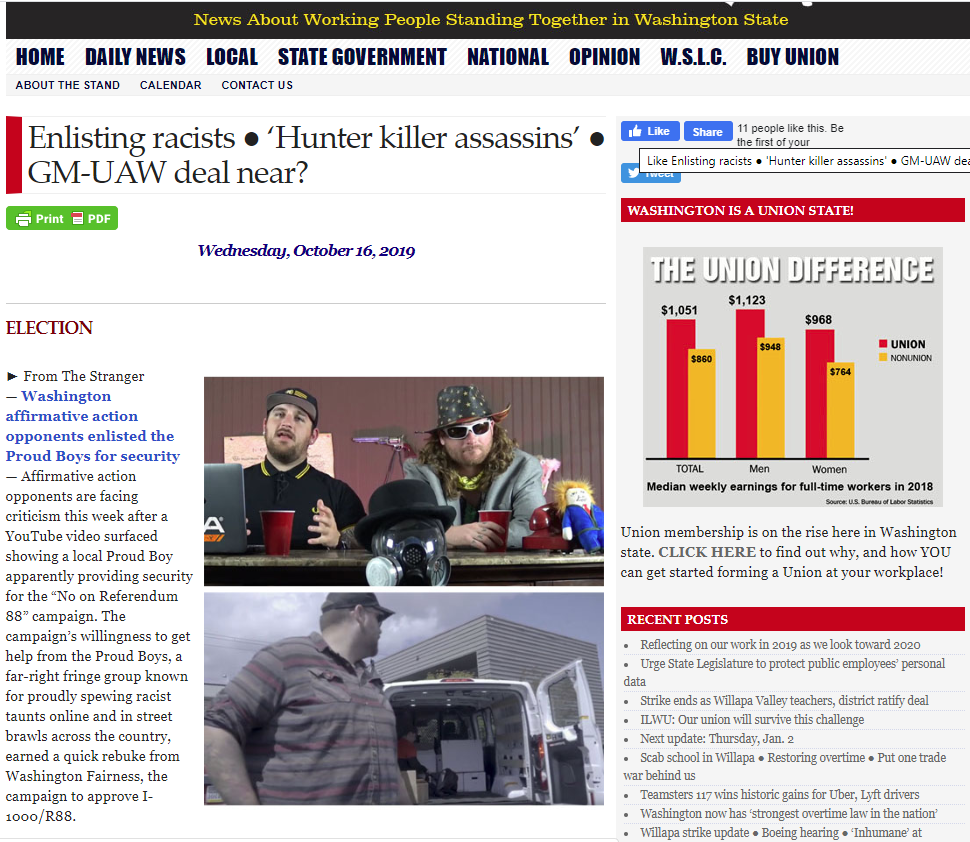 Staggs has not been seen at an event since September 29th when Joey Gibson and the Proud Boys held and event in Seattle’s Westlake park. Proud Boy Kyle Tautfest was arrested for fighting after defending Staggs in a stunning display of cowardice by Staggs. Shortly after this incident rumors circulated online that Zac was no longer a member of the Proud Boys. This was the confirmed on social media by several active members. The incident was filmed by GOP governor candidate Anton Sakharov and posted to his Twitter account.

Antifa attacked pro Trump rally goers when we were trying to get to our cars in Seattle #AntifaTerrorists pic.twitter.com/sEyjj2qfjN

Staggs has a history of re-branding his social media and even group names to escape scrutiny for his racist antics. Blackout Media, Hard Facts, Correct The Record, @TheMAGAGuard, Patriots of Washington, RedPillSeattle, @GretaWatch and @TenebrisSanctus are all operated by or in in part by Zac Staggs. However there is one damning piece of evidence he will never be able to scrub away…. In order to advance to the 3rd “degree” or rank in the Proud Boys organization Zachary Staggs got a “Proud Boy” tattoo on his right bicep. 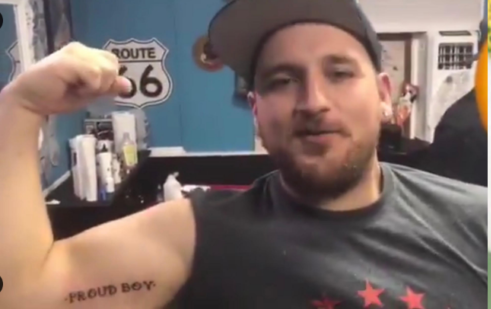 His current online persona is @TenebrisSanctus which is Latin for “Dark Saint” and his profile is obvious glorification of mass killers who fascist chan board and Telegram channels have labelled “Saints”. Dylan Roof, Brenton Tarrant and Timothy McVeigh are just a few of the mass killers revered by the fascist far-right and given the “saint” title. Staggs’s many allusions to a deeper fascist belief than the Proud Boys publicly espouse is of deep concern. His references to mass killers are equally troubling. 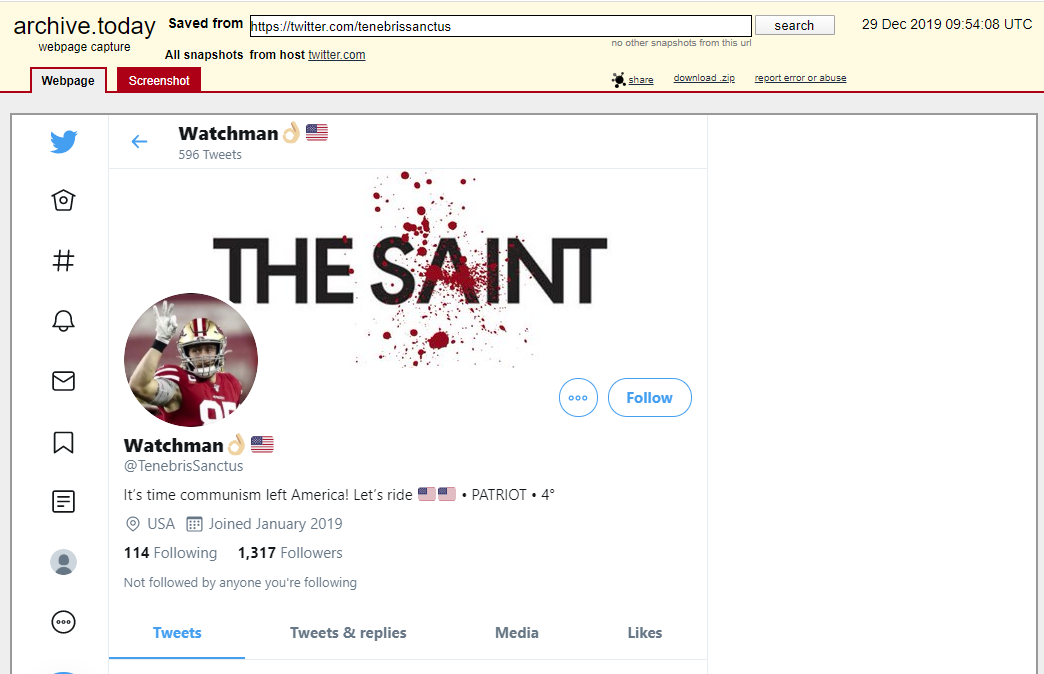 It is unknown if Staggs will be present at the January 5th rally being held by Washington 3% militia as the group has publicly denounced him and other members of the Proud Boys in the past.  Though the Proud Boys and Washington 3% appear to have severed ties with him Staggs is and always will be a Proud Boy and a fascist.